Australian Artist, Ben Quilty explores the depth of death, particularly murder, and the brutal assault of hastening it’s arrival. He is on tour through the desolate heartland of emptiness, an intrepid explorer, however climbing Everest is not his goal, his road leads into the deepest darkest terrains of the human experience.

Quilty was engaged as a War Artist for Afghanistan. The experience brought him face to face with Australians that are endlessly jeopardising their own mortality and live within a violence that has been raging for 18 years. Many have lost their lives and limbs, whist Post Traumatic Stress Disorder has gorged trenches, within the soldiers minds. 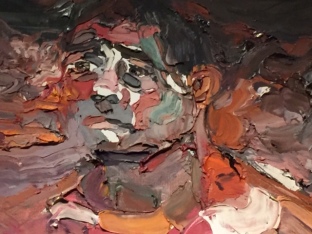 The Gallery visitor that has just had a glass of wine over lunch is taken into a war torn Earth, of shores littered with abandoned life-jackets from a fleeing population, naked soldiers shivering with PTSD and picnic spots that robbed Aboriginals of their life, dignity and history. 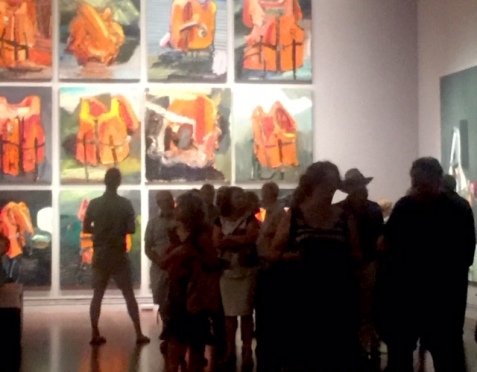 The crisis of war washes up on the Grecian shores, as refugees flee their homeland to find safety abroad. The refugees have left all of their belongings and donned  lifejackets to cross, freezing sea’s in the black of the night. The reality of the Syrian crisis has not infiltrated the ‘connected world’ and the lack of response, drew the artist in. He intends to make the public aware of the trauma these young children are experiencing, by publishing a book of artwork by young Syrian victims.

“My work is about how to live in this world” 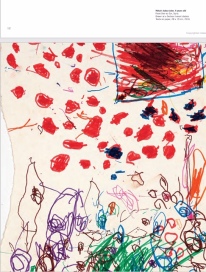 In his homeland, Quigley explores landscapes of the Australian Genocide against its Aboriginal population. In his Rorschach landscapes of Fairy Bower and Amata, the artist documents a howling dark presence in place of a tribal home where children would have ran happily through the trees and bathed in the waterfall and its streams.

Quilty explores humans wrecking havoc on other humans, because they can, or are obliged to, within the social framework of the current systems. Environment’s may appear inviting and innocent but Quigley examines that which is lurking beneath. There is an anger in Quiltys work, he is hurting and you must too. 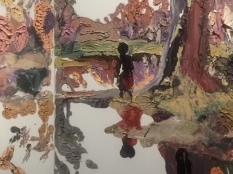 Quilty is a proficient landscape and figurative artist that can morph into a nightmarish surrealism. Quilty is battling a demon much larger and more connected than he. He wants justice, the paintings are the evidence and the gallery space is the court room. Quilty has managed to captured the attention of the art public with his profound statements in thickly plastered paint. 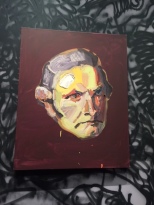 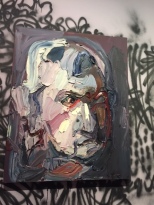 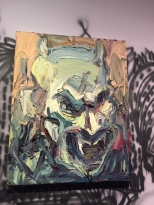 Like Van Gogh, he uses sculptural paint and his tortured metamorphosis are in keeping with Brett Whitely and Francis Bacon.

Quilty’s has witnessed war and it has taken its toll on him, as an artist and a human he has walked amongst the disenfranchised and documents their experience. Where journalists have dropped off , the social issues, like leaves, Quilty has become Australias fourth estate, placing the news, no longer in the paper, but on the walls. Quilty challenges us to look into our own backyard.