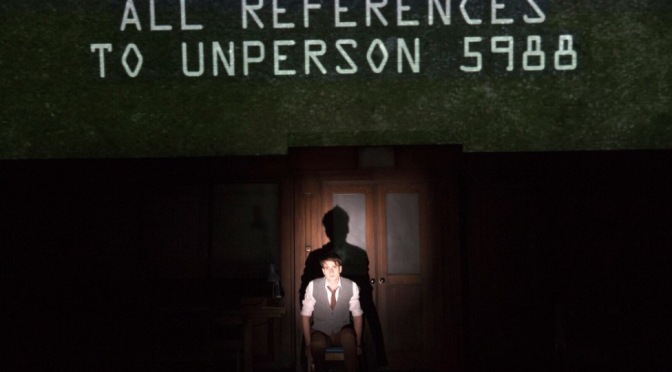 ‘You don’t have to be an expert to know that Newspeak is the only language in the world whose vocabulary gets smaller every year.”

Unwriting people, removing words, controlling thoughts was Orwell’s dismal view of the future. The play explores the tragic demise of the human spirit with brutal clarity.

Winston played by Tom Conroy, is man of fear that falls prey to the Party machinery by daring to hope. His Partner in crime, the fierce and splendid Julia (Ursula Mills) is a vision that bursts into his life to set it ablaze for a brief moment.

The wooden interiors and costumes seem reminiscent of the 50’s when the book was written, a generation looking through the keyhole of the condition of the world in 1984. There are no clumsy cream PC’s or the continuous screening of the Iran- Iraq war that dominated our tv’s, in the 80’s. In its essence, the rich nostalgic settings creates a longing for something personal and contrasts the horror of The Ministry of Love.

The Cast, in 2 minutes of Hate

The acting,direction and effects are flawless. Fiona Press as Mrs Parsons is formidable, by merely stirring a caldron, she captivates a mood that seeps onto the stage.

The Lighting (Natasha Chivers), Sound (Tom Gibbons) and Video Designer (Tim Reid) are major players in the production and carry the full power and might of Big Brother. It’s a beautifully crafted masterpiece, the sets have amazing attention to detail and border on the sublime.

“Nothing is believable, everything is manipulated, it’s unfortunate for humanity”

Do you think the play has any relevance to you? MP

“Which agencies are believable and which aren’t , its awful and in the end all you have is your own soul and that’s ripped apart as well.”

So what did you think about the play?

“It’s done amazingly well , there is nothing held back”

Would you recommend it?

Some audience members had to leave midway in the final act, it is confronting.