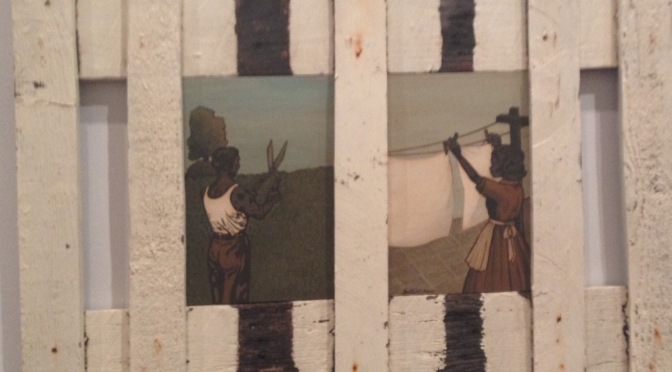 “It’s always been about sharing stories, identity loss and grief, determination , imagination , self belief, cultural integrity, hope and justice, reliance , cultural pride, and more than anything it’s about my people’s survival of spirit.” Hill

Noongar woman, Sandra Hill was a stolen Aboriginal child that was forced into foster care at the age of seven by the Australian Government due to the Assimilation Policy that was still active in 1958. Four children were removed from their mother’s house, they included her self , her two sisters and a brother. They were the 3rd generation of children removed from this family line.

‘In 1994 Hill  was employed as the Aboriginal Community Cultural Officer. During this period she applied for, and was awarded, a Creative Development Fellowship from the Aboriginal and Torres Strait Islander Arts Board of the Australia Council for the Arts. This afforded her the time to carry out research relating to her life experiences as a member of the Stolen Generations’ (extract from Design & Art Australia on-line)

Hill’s work is held in many private collections and is also represented in Major Art Galleries throughout Australia, currently her mixed media work “Beyond the Pale’ is on display at the NGV Ian Potter Gallery at Federation Square in the Australian Art Exhibition. She explores domestic labor as part of the ‘Assimilation Project’.

In the past, Domestic colleges were set up to train poor white girls and ‘half-caste’ Aboriginal children to attend to the needs of the wealthy. 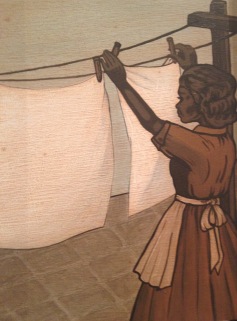 ‘In the early issues of Home Beautiful there was a feeling of nostalgia for the passing of an age in which almost everyone in the middle and upper classes could afford to keep a live-in maid. Even at the turn of the century , architects and designers were discussing the ‘servant problem’ and trying to come up with ways to help women face a future without servants’ The Australian Home Beautiful, from Hills Hoist to High Rise.