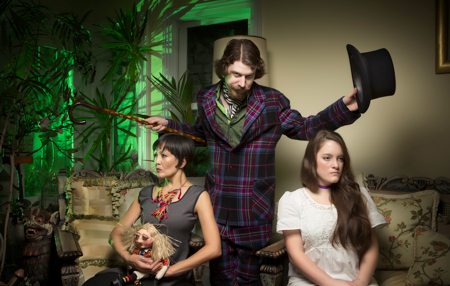 Do You Fear The Dark begins with the poignant short play Perhaps, in which a despairing mother envisages increasingly unnerving and outlandish scenarios for her runaway daughters.

Following a vibrant musical number that links the two plays, we are thrust into the dark heart of fantasy with the chilling and modern ‘fairy tale’ Tom Tat

Award winning Dramatic Pause was initiated by writer Hayley Lawson-Smith and her husband David Lawson-Smith, a director. Together, they have entered various one act play festivals and Short & Sweet competitions. ‘Do You Fear the Dark?’ is their new and exciting venture comprising of two plays, ‘Perhaps’ and ‘Tom Tat’, both of which incorporate music and movement.

‘Perhaps’ was created at Sherbrooke Theatre Company’s Play in a Day event. Written in one night, this fantasy received excellent audience, response after only a day’s rehearsal.

‘Tom Tat’, the story of a modern-day Rumpelstiltskin and Pandora was first performed at the annual PlaySix Festival in 2014 as a 20-minute play. Director Natasha Broadstock who had met Hayley earlier that year, when they both acted in the Midsummer Festival. She loved its quirky darkness so much that she requested Hayley explore the script further, with the goal of producing it for a longer season.’Perhaps’ and ‘Tom Tat’, now a far more substantial play of 40 minutes, they complement each other beautifully.

The director and all the performers were part of the ensemble cast of Mockingbird Theatres 2014 production of ‘Quills’. Each brings with them personal talents which highlight the fairy-tale qualities of the production.

‘Natasha and Hayley share a mystical, slightly dark vision for the production that will spark your imagination.’

Hayley and David Lawson-Smith live up to their claims. 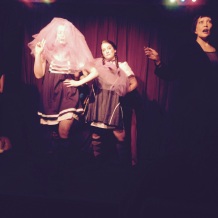 Both plays were rich with dramatic overlaying of primal concepts,with captivating performances. Passion and security are at war with each other in Perhaps, they are co-dependent enemies. Experience and innocence are pulling in opposing directions and are becoming mutually exclusive, much to the delight of the predator. This theme is also explored in Tom Tat.

Universal themes, with historic metaphors, dash across the stage with muted rage. There are always desperate moments in one’s life, when impulsive deals are made and later regretted. The intensity of Tom Tat, bewitched the audience. The narrow theatre of The Butterfly Club, became a lens into a microscopic tragedy, that drew in the inquiring mind and turned it into a world.

Hope is the only thing left, and one has to battle off the demons of doubt. It was a large story, destined for a large stage, with Actors fit for the journey.