Bollywood Star, Actor and Producer, Anil Kapoor (Slumdog Millionaire), charmed a full audience in the Great Hall of the National Gallery of Victoria, at the Indian Film Festival of Melbourne Awards.

International designers, famous Indian Actors and Directors with Local Politicians, crowded the stage in a first class presentation of fashion and film, on Indian Independence Day.

It was a night jammed with creative blitz, opening with swirling Bollywood dancing and followed by The Equality Fashion Show, which featured five diverse Fashion Designers and their latest creations. Films and Awards were presented between designers in a tight and full schedule.

Indian Arts are charging into the 21 Century with a voice, ripe and ready to nerve the old guard. Winner of the Western Union Short Film Award went to India Backchod for their production of Rape – It’s your fault.

Equality and Diversity is the war cry of the Indian Film Festival, featuring stories that address issues of disability, homosexuality, racism and sexism, with a contemporary edge.

Winners on the IFFM awards for 2015 for best film was given to “Piku”, Best Director Award went to Shoojit Sircar and Best Actor award was given to Irrfan Khan for his performance in “Piku” The film is a quirky comedy about the relationship between an ageing father and his young daughter, living in a cosmopolitan city, dealing with each other’s conflicting ideologies while being fully aware that they are each other’s only emotional support

Best Actress went to Bhumi Pednekar in Dum Lagake Haisha and Best Indie Film went to Kaaka Muttai for Crows Eggs. IFFM Excellence in Cinema was awarded to Anil Kapoor and the Telstra People’s Choice Award was for PK.

The film awards show case the depth of talent in Indian Cinema when last years 2014 Film Awards went  Bhaag Milkha Bhaag, a true story based on the life of an Indian athlete Milkha Singh, who ran for India in the Rome,1960 Olympics.

The Fashion show featured the bizarre creations of Richard Nylon’s singular vision of Holy ruptures. Nylon specialises in couture millinery and bridal headpieces, they are literally sculptures in fabric. Winged beauties weighed with attitude, carried off the fantastic objects with ease.

North Melbourne football player Majek Daw, wowed the ladies as he emerged out of the violet shadows with his sultry looks and bare chest wearing a Roopa Pemmaraju designed wrap, flung around his neck.

Pemmaraju showcased Aboriginal Art in her fabrics and the female models were crowned with indeginous flowers. The Australian context in the music and clothes ignited a sense of pride in a culture that continuously overlooks the remarkable sophistication of its own. The models breezed down the runway in flowing fresh designs, perfect for a hot and languishing summer.

Then came Gaurav Gupta, Indias renowed couturier. He tantalised the male audience with sheer and daring gowns that revealed more, by covering less. Stocking creations with beaded slashes playfully carved a thin line between that which is private and what can be seen in public. His work is dramatically elegant.

Designer for the Bollywood A-listers, Anamika Khanna brings a slice of traditional India to the catwalk. Hers is an edgy interpetation of Eastern fashion meets the West, whist remaining faithful to her regal audience.

Mildura born, fashion designer Susan Dimasi knows local taste, the female audience fully engaged with her very wearable collection of light chic frocks. Dimasi is a designer with an environmental conscience. Partnered with Chantal Kirby in the fashion house MATERIALBYPRODUCT their work is regarded as Art and are held in the NGV collections. 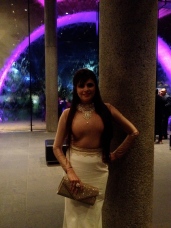 “Its good to see the Indian community doing so well” Shavvir remarked.

The event was also a fund raiser for The Royal Childrens Hospital garments were sold to raise money at the end of a long and enjoyable evening.